“Lo que fui, lo que soy y seré, por mi isla bella” (“What I was, what I am and will be, for my beautiful island”)  ~ From the song “Cuba Isla Bella” by the Cuban Salsa-Hip Hop music group Orishas

I love Cuba. I love my Cuban friends, Cuban music, Cuban film, Cuban dance, Cuban history. I love walking the streets at Havana – where I never feel unsafe, even at night. I love taking a break from the constant Internet access and stimulation in the U.S., and instead experiencing life in the moment without distractions. While trips to places like Spain and England can be fun and fulfilling, Cuba is a truly unique place in the world that offers experiences other countries cannot. Going to Cuba is special – by visiting the socialist nation, you put yourself in a special position as a first-hand witness to a radically different society about which most Americans know very little. 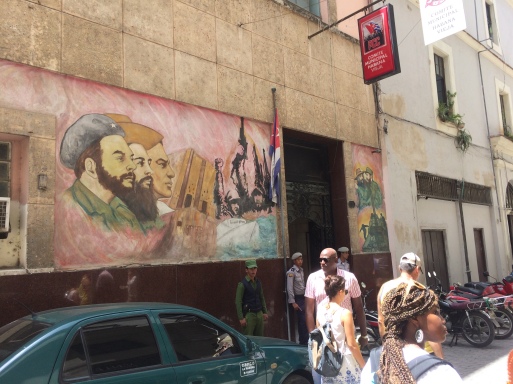 “Cuba, que linda es Cuba” (“Cuba, how pretty is Cuba”) ~ From a song sang to me by Cuban schoolchildren when I visited their English class

When I arrived in Cuba, I experienced a good month of culture shock. For starters, there was the language. My residential director told us “if you can understand Cuban Spanish, you can understand any Spanish dialect”. She was right! Because I learned to understand the quick, mumbling, cut-off-the-end-of-words, Cuban Spanish, I can now comfortably understand any dialect of Spanish. Apart from the language, there was a lot of other stuff to adjust to as well. Instead of taking Ubers, I took maquinas, collective $0.50 taxis that ran along the major roads. When I went to stores, I had to learn to ask “el ultimo?” (the last) to determine my place in line.

Once I adjusted to life in Cuba, however, I grew to love the country – so much so that I did not want to leave. In Cuba, there is not the same level of rampant individualism that exists in the U.S. In Cuba, when I went out with friends and someone bought a drink, that person passed the drink around to everyone with us, making sure to share it with everyone. In Cuba, when I went out with a group, we didn’t leave until everyone was ready to go – requiring a lot of patience for some, but ensuring that no one is ever left behind. As opposed to the at times very stressful environment in the U.S., Cuba is a place where I can truly relax and enjoy life without worry. Before I experienced living in Cuba, I never knew that I could feel so relaxed and free – and now that I’ve been, I am constantly trying to find a way to go back and experience that feeling again! In this hectic world, it’s not something

“Wow! You’re going to Cuba! I didn’t even know you could do that!” ~ Many Americans to me when I told them where I was headed for 4 months

Going to Cuba gave me the unique privilege of seeing a society largely unknown to my American peers. Among them, my trip to Cuba drew a lot of attention and I found myself thrust into an important role. I began writing weekly emails to friends in the U.S. and received many responses to each one. People began telling their friends about my emails and asking me if I could add others to the list. Soon, I was emailing over 50 people weekly about my experiences. It seemed that after more than 50 years of isolation, Americans were fascinated by their socialist neighbor.

Beyond reporting about ordinary life (which to Americans was anything but!), I also had several remarkable experiences that put me into an interesting position as an impromptu journalist on the ground. For starters, I was in Havana when Hurricane Irma hit. While the storm was very strong and the initial damage was heavy – I remember walking outside for the first time and seeing fallen trees, branches everywhere and water in the streets of the first several blocks close to the water – the recovery was also remarkably quick. When my friends in the U.S. told me that the Americans media was either not covering Cuba at all or presenting an over-dramatized picture of the damage that could (and did) drive away tourism, I decided to write about what I had experienced and give my own analysis of the situation. On Facebook, I shared a collection of photos showing the remarkable recovery and wrote a short note about what happened. Much to my surprise, this post got hundreds of likes and was shared more than a dozen times. This inspired me to write a larger report, which was eventually published by Liberation News, an independent, leftist newspaper.

Again, this was an experience I could not have had in more popular tourist destinations such as England or Spain. In Cuba, my experiences were much more valuable. This, in fact, was one of several incredible events about which I wrote to friends. Others included being in Havana for the first anniversary of Fidel’s passing, going to the Cuban Film Festival and meeting Puerto Rican rapper-turned-documentary film maker Residente of Calle 13, touring the newly opened museum Memorial de la Denuncia about CIA-sponsored terrorist attacks and plots against the socialist government since 1959, and attending the concert of the amazing Salsa-Hip Hop group Orishas who were returning to Cuba for the first time in over 15 years. I also wrote about taking a friend to the hospital, where, free of charge, she was immediately seen by the doctor, given an X-Ray and treated for a sprain ankle. I could go on – I had a million of special experiences like these, as has any American that has been to Cuba for an extended period of time.

Cuba is special. It’s also not for everyone. While I was having the time of my life last fall, I remember hearing a different American student complain about missing Chipotle and not having constant Internet access. If those are the type of things that are important to you, Cuba is not for you. On the other hand, if you are a person with a passion for exploring the world, having new experiences and adopting an important role as witness to a remarkable society largely unknown to most Americans, I highly recommend you go to Cuba. There really is no other place like it.

View all posts by colibricubatravel